On Monday 23 September we launched an exciting new project in France: Design Goes To School.

It's an educational program involving 6 schools in disadvantaged areas in the Paris region. A class of 25 students (aged 12-13) from each school has just begun a course focusing on human rights.  The course will run from September 2013 until June 2014 and will teach the students design and social communication basics with a "hands on" approach.

The classes are taught by 6 professional graphic designers living in the area who will meet the students on a weekly basis. In the classes the students will discuss the issues revolving around the right to education, and the tutors will help them to turn their thoughts into socially relevant messages and images. The students will be encouraged and helped to make posters (many, many posters we hope) and a giant fresco.

During the year there will be visits from NGOs and other guest speakers to provide different perspectives on human rights issues and inspire the students. At the end of the course, the best work will be featured in an exhibition.

The course has been made part of the students' curriculum for the year, therefore attendance is compulsory and success in the classes count towards the end of year marks.

The project has been made possible by the generous support of Fondation de France and Fondation HSBC pour l'Éducation. 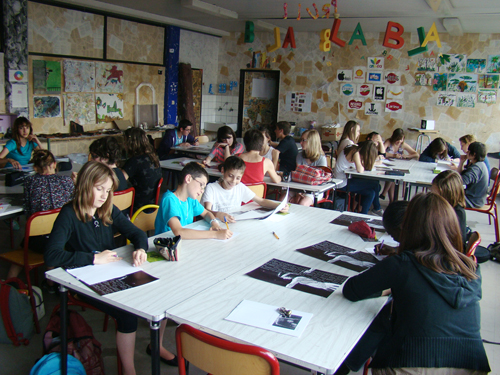 After the success of its Pan-African workshops  in 2011, in 2012 poster for tomorrow has launched a series of graphic design workshops in France for teenage students. The focus of the workshops is to show (and intstruct) students how images can be used to communicate ideas.

Camille Saint Saens Secondary School in Chaumont, France hosted the first of these workshops (led by Johann Blanke) during the 23rd edition of the Chaumont International Poster and Graphic Design Festival. Johann Blanke, a native of Chaumont and a passionate graphic designer, is the co-founder of the "Les Hameçons Cibles" graphic design studio.

Camille Saint Saens Secondary School, where some of the festival events are taking place, has a strong graphic design program and decided to include 30 of its students in poster for tomorrow’s workshop. As part of the workshop, the students studied a poster made by Johann, which was exhibited worldwide in 2010 as part of poster for tmorrow’s campaign against death penalty and will participate in a longer workshop on GENDER EQUALITY NOW!, the theme of the 2012 edition of poster for tomorrow events.