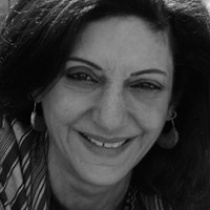 
Leila Musfy is Professor of Design at the Department of Architecture and Design, American University of Beirut [AUB] since 1992. She helped in the launching of the then, newly creaated Graphic Design Program at AUB, the first program of its kind in Lebanon and the region. She holds an MFA degree from Cranbrook Academy of Art Michigan USA where she studied under Katherine and Michael McCoy.

Her professional design work ranges from book design and publications to corporate identities to posters. The major books she designed are:
Riad Al Solh during his time by Ahmad Beydoun; Of Symbols and Stones, a Travel Journal by Leila Bisat; Memory of the South; Ateliers Arabe; Contemporary Art in Syria; Beirut Giesen and Jerusalem Today. She also designed the catalogs for the Beiteddine Festival [1994, 1995, 1996, 1997 and 2004]. Some of the corporate identities she worked on are: BluFin sushi, Beiteddine Festival Committee, Order of Engineers and Architects, Arche de Noé children store.
Before moving back to Beirut in 1991, she worked at Ethel Kessler Design in Washington DC.

Finally, she is a member of the Iridescent Advisory Panel.

Leila hasn't favourited any poster yet.