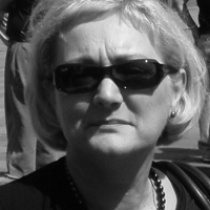 Born in Warsaw 1956. 1985, graduate with honourable diploma of Warsaw University of Life Sciences (SGGW), Poland on the Faculty of Wood Technology. 1987, Warsaw Academy of Fine Art, postgraduate studies in the field of paper conservation as a student of Professor Tadeusz Tuszewski. Since 2005 postgraduate doctoral seminar at the Institute of Art of the Polish Science Academy and preparation to the doctoral work on âWojciech Zamecznik and Polish photographic posterâÂ.
In the years 1985-87 she has worked at National Library in Warsaw in position of the Vice-Director of the Book Conservation Department. Later, between years 1986 and 1996 she was Head of the Poster Conservation Department at the Poster Museum at Wilanow. Since 1996 in position of Director of the Poster Museum at Wilanow, Warsaw, Poland.
Author of many articles and essays in the field of paper conservation, graphic design as well as poster art and history in specialist magazines, books and catalogues for exhibitions.
Since 2003 Maria Kurpik is a lecturer at Warsaw College of the Photography Art and since 2006 also a lecturer at European Academy of Fine Art in Warsaw in the field of history of poster and contemporary graphic design.
Lectures on history of the Polish poster and graphic design at fine art universities, Tokyo, Japan (2003), ggg gallery, Tokyo, Japan (2007) as well as at Asia University, Taipei and Taichung, Taiwan (2006, 2007), Xalapa Univesity, Mexico (2008). Member of the Jury at International Poster Competition, Taipei, Taiwan (2006, 2007) and International Poster Biennal in Mexico City, Mexico (2008).
Awards:
2003 âThe Distinguished Worker of CultureâÂ given by the Ministry of Culture and National Heritage of the Republic of Poland for the special achievements in the field of culture
2003 âSouthern AwardâÂ for the popularisation of the art of poster, Warsaw