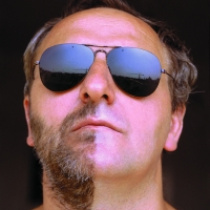 Boris Ljubicic is a recognized explorer of visual communications and design. His works cover all of the design categories: visual identity, typography, billboards, books, TV and web-design. His works are exhibited on half a dozen most significant international competitions, and regularly appear in international magazines, yearbooks and specialized publications that influence the future of the design. His works are dissimilar, challenging and confusing.The message is at least double-coded. As an author originating from a so-called transitional country, he dedicated his efforts to sports, culture, economy and politics. He achieved excellent results in each of these areas, changing the global standards along the way. In his quest for the Croatian visual identity, he sacrificed his creativity and dedicated himself to a higher goal. His international diversity is not a style or handwriting, but a concept aimed to form a public opinion. He won almost all of his contracts through public tenders, but he also has a collection of works that were not published. He is a creator of many design initiatives. In 2002, he initiated the idea to create a visual identity for our continent - EUROPE 2020. His STUDIO INTERNATIONAL is not named after an author or owner, as usual, because he considers the visual language and professional standards he regularly applies to be a global activity

Boris hasn't favourited any poster yet.