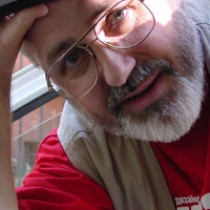 Graduated from the Moscow Institute of Telecommunications (1974) and the Academy of Fine Arts, I. Repin Institute of Painting, Sculpture and Architecture (1986).

Member of the Committee for State Awards for Art and Literature under the President of Russia (1996-2003).

Organized and curated more than 100 design exhibitions, competitions and events in Russia and abroad.

President of the Academy of Graphic Design (Member of Icograda).

Serge hasn't favourited any poster yet.