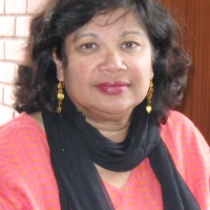 Oxfam Indias purpose is to create a more equal, just, peaceful, and sustainable world by empowering the poor and marginalized to demand their rights, and by building active and engaged citizenship that upholds the right to life with dignity for all.

Oxfam India was launched on September 1, 2008 after integrating the programs and staff of the 6 Oxfams currently operating in India. It has launched a new strategy entitled Demanding Rights, Creating Opportunities that lays out its vision, mission and strategy for 2010-2015. Collectively, it will have an annual program of about $20 million, which will be implemented through grants funding for about 200 partner NGOs all over India. Like other Oxfams, Oxfam India will also adopt a rights-based approach and will work on policy, advocacy and grassroots programs in the following 4 thematic areas of Oxfam International:

For the last 18 years, Nisha worked with the World Bank on development issues. She has extensive experience working in countries in the East Asia Region (Cambodia, Vietnam and Indonesia) and in the East Africa Region (Tanzania, Kenya and Uganda). She spent 5 years (from 2003-2008) as the Country Manager for Cambodia, based in Phnom Penh, in charge of developing and implementing the World Banks strategy and program in Cambodia. Prior to that (from 1997-2002), she spent 5 years in Hanoi as the Lead Economist for poverty and social development issues for the Vietnam program. From 1989 to 1997, Nisha was based in Washington DC and worked on development issues in Indonesia (1994-97) and in East Africa (1989-1994).

Nisha was responsible for doing policy-oriented research on the impact of Australias trade and tax policies on poverty and income distribution and feeding that into the policy dialogue.

198185 Ph.D. in Economics from the University of Virginia, Charlottesville, Virginia, U.S.A.

1977--79 M.A. in Economics from the Delhi School of Economics, Delhi University

Board member of a Cambodian NGO called Youth Star in Cambodia, whose mission is to build a just and peaceful nation by promoting and supporting citizen service, civic leadership and social entrepreneurship amongst young Cambodians.

Nisha hasn't favourited any poster yet.