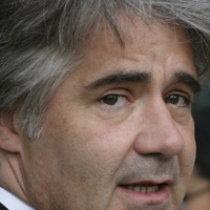 Christian Guellerin was born in 1961, in Le Mans, France. He studied in a business school and achieved an MBA in the IUA of San Francisco. He chaired, among others, the Institut de Préparation à lAction Commerciale at the Chamber of Commerce in Nantes, the Ecoles de Gestion et de Commerce (Business and Management Schools) network and is currently Director of the Design School in Nantes. In the 90s, he also gave classes at the university; he gives regularly conferences in France and abroad, such as "Design and globalisation, a friendly design context for a strategic discipline", in Finland, on May 25th, 2011 and Design, Ethics and Humanism, in Pasadena, on October 24th-26th, 2004. He also published a book, "Designer : carrières et professionnalisation" (bilingual edition) in 2010. Since 2007 he has been the head of the Cumulus International Association of Universities and Schools of Design - Art and Media, the most important international network focusing on design education issues, with 3,100,000 students and around 30,000 professors. Christian Guellerin is also Honorary Consul of Estonia in France.

Christian hasn't favourited any poster yet.