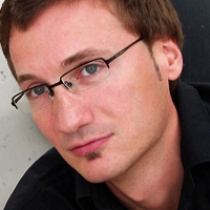 Born 1972. in Belgrade, Serbia. A graduate of the Academy of Applied Arts, Vladan Srdic worked as an art and creative director at advertising agencies like Saatchi & Saatchi, Y&R, as well as at the various design projects in Germany, Austria, Canada, the Netherlands, Hungary, Serbia and Slovenia. For past 10 years V. Srdi? has been living in Ljubljana. He is a founding partner of Studio 360, which he has been running successfully since 2005.

His work has been published in the most distinguished publications in the field of visual communications and graphic design: Graphis, Taschen, Novum, Print, ICO noAH, Neshan Magazine, This is a Magazine, No Name Magazine, PIE Books, Rockport Publishers, Rotovision, Harper Collins, Maomao Publications, New Moment, Kvadart, etc. He has also taken part in more than 50 international exhibitions, including 5 one-man shows. Vladan Srdic is a member of D&AD, ULUPUDS and Art Directors Club of Serbia.

According to the selection of the publishing house Tashen V. Srdic has been ranked as one of the 100 best designers in the world.

Vladan hasn't favourited any poster yet.