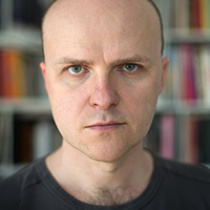 Jerzy Skakun graduated from the painting faculty of Fine Arts Academy in Gdansk. From 2003 she works with Joanna Górska. From 2003 they have been working in their own graphic studio named Homework. They design posters, work on printing graphics and graphic works for cultural events. Their works were exhibited (among other places) in Paris, Berlin, London, New York and Hong Kong. They are prizewinners of several competitions. The most important of their achievements are: gold medal for Poster Biennial in Mexico, silver medal on International Biennal of Poster in Chicago and also Józef Mroszczak Honorary Award at XXI Poster Biennial in Warsaw. Jerzy Skakun and Joanna Górska work with cultural institutions such as: Powszechny Theater in Warsaw, New Horizons Association, Polin Museum, National Museum, MOS Cracow, Warsaw Rising Museum, Vivarto, Mañana and Pulaski Museum in Warka.
About their work, design critic Ellen Lupton wrote [...] Although the decline of the Polish poster under capitalism has been widely mourned, Joanna Górska and Jerzy Skakun are bringing the medium back to life, and updating it for the twenty-first century. [...] Thus, while reviving the poster tradition, these designers are also wedding an art-based medium to the contemporary practice of graphic design.

Jerzy hasn't favourited any poster yet.