Every year 4Tomorrow chooses a basic human right to address. In 2014 it is the universal right to fair employment. Graphic designers from around the world were invited to make posters on this theme – this year the contest received 4301 posters, setting a new record for the second year in a row.

For the first time the exhibition of the 100 best posters will be held outdoors: outside 4 tomorrow’s new home in Esplanade Nathalie Sarraute, Paris. This allows the exhibition to be extended to a massive 50 days (instead of the four days possible in 2013). The intention is to make the posters more accessible to more people and engage the general public with the fight for human rights.

The exhibition premiere will also mark the official opening of boutique for Tomorrow. This is a shop inside 4tomorrow’s new headquarters selling design related postcards, books and posters. The goal is for the Boutique to become a hub for people interested in design and human rights and a shopping destination in its own rights. There is already an exclusive collaboration in the pipeline to sell an exclusive cumin version of Sablés in the boutique, developed by 4tomorrow founder Herve Matine and “Les Sablés d’Asnelles“ a 100 years old biscuit factory and more surprises...

As is now traditional, the best 100 posters from this year’s contest will also be published in a catalogue that will be launched at the premiere. This contains a foreword by Corinne Vargha, Chief of Fundamental Principles and Rights at Work Branch, International Labour Organization.

10 December 2014, will be the 4th "Day for Tomorrow". This day, International Human Rights Day, will see the launch of “Work Right” exhibitions around the world.

‘Our aim, in short, is to ensure everyone can realise their fundamental human rights to work in freedom, dignity and security and have a voice at work. Raising awareness and supporting and sharing good practices the world over play a central role in those endeavours. The ILO congratulates Poster for Tomorrow on this initiative and its remarkable output. The 100 posters you are about to see, which were selected from 4,300 entries, are a moving contribution to these efforts: stark testimony to the world - and on behalf of the women, men and children they portray - that everyone should be able to enjoy their human rights and 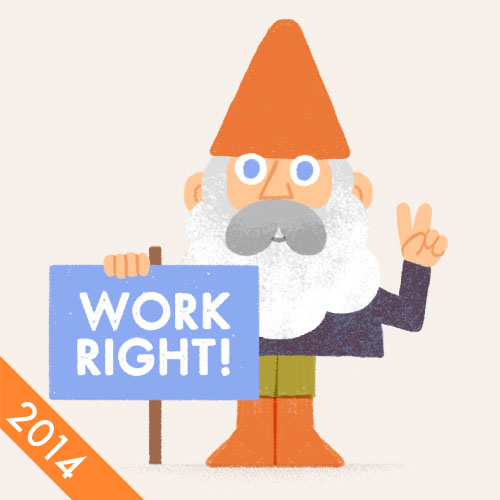 We all have the right to work without discrimination or exploitation of our gender, age, nationality or physical condition.

We all have the right to work for a wage that is fair reward for our labour and that will enable us to support ourselves and our families.

The right to work protects us from child labour, gender and age discrimination and exploitation in all its forms. It entitles us all to the same opportunities, benefits and protection from exploitation or malpractice.