During 2011 posterfortomorrow has been running a series of workshops across Africa to give young African designer the chance to work with some of the leading designers in the world.

Now that experience is drawing to a fantabulous final stretch with the last 3 workshops of this edition of the Pan African Workshops project.

Two of these workshops will take place simultaneously - amazing, yes - in Uganda and Guinea, starting on monday 24th of October. In Uganda, Marteen van de Vijfeijken from Netherlands will be hosted by The Margaret Trowell School of Industrial and Fine Arts of Makerere, while in Guinea the Centre of Formation Informatique (CRIFIG) of Mamou will host Bertrand Nicolle from France.

The third and final workshop will happen a bit later, starting on monday 12th of December in Congo, where the Académie des Beaux Arts of Kinshasa will welcome Vincent Janssens from Belgium.

Our fight for the right of education across the whole world continues. Learn more on the rest of our website. 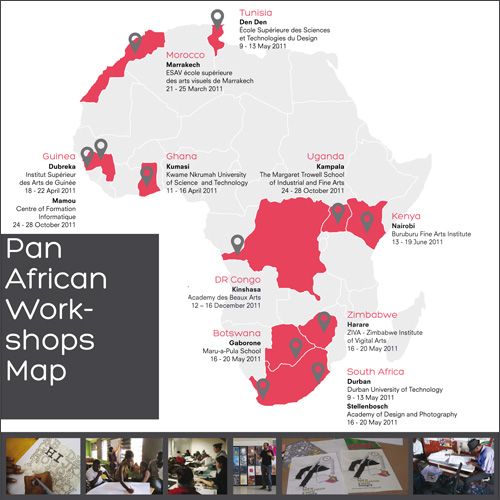 In 2011 we organised a series of workshops throughout Africa, led by 13 different designers from all over the world in 10 countries.